Scientific information shows that the sea asks for silence

In order to contribute to a healthier ocean, the Forum for the Conservation of the Patagonian Sea and Areas of Influence sent the Argentine authorities the technical document “Seismic Prospecting. Risks and impacts in the Argentine Sea“. 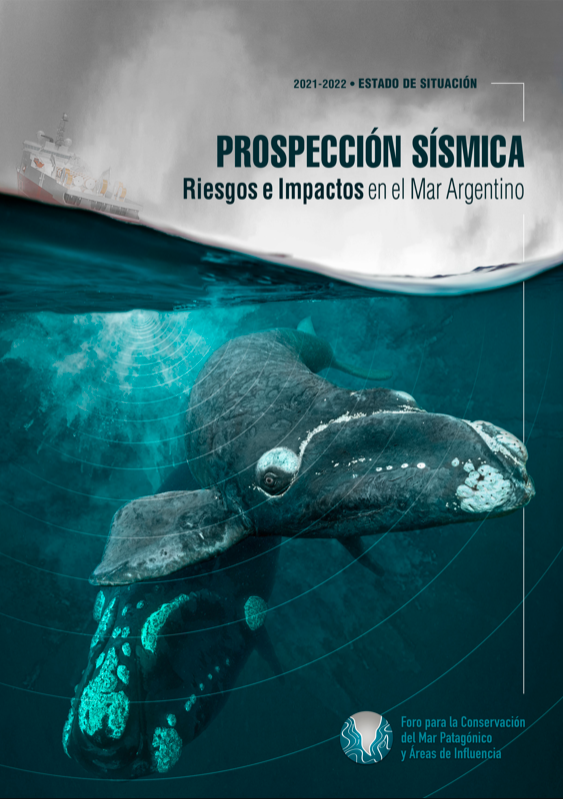 In order to inform about the impacts of seismic prospecting in the Southwest Atlantic, the Forum has prepared the document “Seismic Prospecting. Risks and impacts in the Argentine Sea”. This publication is a technical support based on scientific data for the decision makers.

The Argentine Sea presents key areas for the functional and ecological structure of the ocean; areas of high productivity and essential for migration, reproduction, and feeding of various species that must be conserved.

The “Offshore Seismic Acquisition Campaign; North Argentine Basin (Areas Can 108, Can 100 and Can 114)” approved by the National Ministry of Environment and Sustainable Development, impacts biodiversity in areas that were identified by this portfolio as priority areas for marine conservation and were even candidates to become marine protected areas (Continental Slope Front).

The Argentine Sea, as well as the common areas with Uruguay, its sea, and the entire Southwest Atlantic, may suffer directly the effects of the search for hydrocarbons, both due to the impact of the sound cannons used in this activity and the possible consequences that oil extraction may generate.

An evaluation carried out by the “Universidad Nacional del Centro de la Provincia de Buenos Aires” (National University of the Center of the Province of Buenos Aires) revealed that the probability of spills occurring during offshore oil exploitation can reach 100% for some production levels estimated for the Argentine Platform. Accidents can even originate from triggers located at great distances from the spill site. For example, last January 15, more than 6,000 barrels of crude oil spilled off the coast of Peru, apparently as a result of the eruption of an underwater volcano in Tonga, 10,000 km away.

In a scenario where the devastating effects of global change are manifested on a daily basis, this project is a setback for the life and health of the environment and the people.
It is urgent that Argentina initiates a gradual energy transition towards decarbonization, giving impetus to technological, regulatory, social, and labor transformations for this purpose. This transition may take time, but it is necessary to prioritize it on the agenda.

The sea knows no limits, and this implies a national and international risk that requires the unavoidable responsibility of public managers, companies, and the community in general to evaluate and monitor the impacts, as well as to develop alternatives to mitigate them as much as possible.

Therefore, the Forum requests the Argentine authorities to consider the background of the technical document in order to suspend, as a precautionary measure, the seismic prospecting campaign referred to.

In July 2021, the Forum for the Conservation of the Patagonian Sea and Areas of Influence participated in the first public hearing held in Argentina and explained why the sea asks for silence.

There were more than 500 speakers, most of whom were against seismic prospecting.
The hearing lasted three days and is available on the YouTube channel of the National Ministry of Environment and Sustainable Development.

Some habitats in the Southwest Atlantic have been identified as being of high value for biodiversity conservation, particularly for endemic or threatened species, and are relevant due to the structural and ecological functionality of the target ecosystem.

Workshop on Marine Protected Areas of Argentina in Rawson, Chubut, brings together key stakeholders
Seismic prospecting in the Northern Argentine Basin has been temporarily sus-pended, with conditions.
Login to The Forum for the Conservation of the Patagonian Sea
Reset Password
Enter the username or e-mail you used in your profile. A password reset link will be sent to you by email.