We condemn the destruction of nests and the damage caused to the Magellanic penguin colony of the Punta Tombo Reserve and request the reinforcement of their protection. 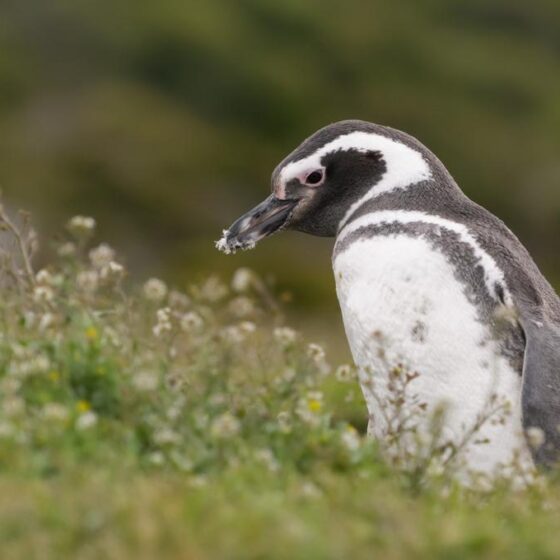 The Forum for the Conservation of the Patagonian Sea and Areas of Influence expresses its disavowal to the destruction of the breeding habitat of the Magellanic penguin (Spheniscus magellanicus) and the consequent damage caused to the eggs and chicks of this species. This incident occurred recently in the “Important Bird Area Complejo Punta Tombo” (Área Importante para la Conservación de las Aves Complejo Punta Tombo, AICA – recognized by BirdLife International) and located within the UNESCO Biosphere Reserve “Patagonia Azul”, in the province of Chubut, Argentina.

The concern and indignation that arose in society as a whole in light of this event are welcome and fundamental as a social support mechanism for the competent authorities – at the provincial and national levels – to investigate and punish those responsible. With the support of the academic sector and civil society, we request for the authorities to continue pushing for the exhaustive investigation of this incident so that it allows to punish those responsible for this environmental damage in an admonitory way. We also request that immediate mitigation and repair measures be taken to prevent similar acts in the future and that the effective protection of the colonies is strengthened.

The species in this area were severely impacted. A mechanical shovel and/or grader opened a road of approximately 800 meters long, followed by the installation of a wire fence with an electrified buoy. It crossed Magellanic penguin nesting areas and destroyed a large number of nests along its way.

Every year, in the Punta Tombo-Punta Clara area, some 200,000 pairs of penguins of this species nest, and they breed between September and March. They build their nests in soft ground near the coast and both parents take turns incubating the eggs and foraging for food. The young become independent after 90 days. Magellanic penguins have high fidelity to their nest, and they return to the same place year after year and reunite with their mates, thus maintaining very long-term bonds. Therefore, the destruction of their nests also destroys the pairs’ bond and deprives them of the breeding site they have maintained and defended throughout their lives. Likewise, the wire fence hinders the passage of the adult penguins to the sea, a journey that one member of the couple constantly makes in the search of food for their chicks, while the other stays behind to guard the nest. The cattle present on the property also have an impact due to trampling, which can crush the nests and chicks.

These facts severely affect a landscape that is protected by an international declaration (UNESCO Biosphere Reserve) and have a negative impact on the Magellanic penguin population, a species sensitive to changes in its environment, as warned by the directors of the Global Penguin Society (GPS) Pablo García Borboroglu (CONICET researcher) and Laura Reyes.

This is an emblematic species in the Southern Cone countries and one of the icons of nature tourism in the region. This particular colony attracts about 120 thousand tourists every year, generating income for local communities.

“The incident that summons us represents a real environmental crime; acts like these should be typified as environmental crimes,” reflects Ana di Pangracio, deputy director of the Environment and Natural Resources Foundation (Fundación Ambiente y Recursos Naturales, FARN). In that sense, the Forum for the Conservation of the Patagonian Sea and Areas of Influence considers it necessary to urgently incorporate a chapter on environmental crimes into the Argentinian Penal Code. Likewise, we emphasize that both the Executive and the Legislative Power of the Nation have a fundamental role to play and their absolute proactivity in this matter is needed.

To avoid this type of situation, protected areas should be expanded to safeguard not only a portion of the biological unit to be protected but also all of its conservation values. Therefore, the province’s nature reserves and the Biosphere Reserves declared by UNESCO should be provided with more budget, personnel control, and surveillance means, as well as infrastructure, so that they can effectively fulfill their conservation objectives.

“Taking this background into account, civil society organizations that make up this network express our concern and offer collaboration and technical advice to prevent these events from happening again, as well as our support in the participatory processes that allow us to direct our proposals concerning the protection of biodiversity and the prevention and appropriate punishment for environmental damage,” concludes Alejandro Vila, president of the Forum for the Conservation of the Patagonian Sea and Areas of Influence.

In memory of William Conway

Rejection to the approval of the seismic exploration project in the Argentinian Sea
Rejection of mining activity zoning law in Chubut
Login to The Forum for the Conservation of the Patagonian Sea
Reset Password
Enter the username or e-mail you used in your profile. A password reset link will be sent to you by email.