A law passed by both chambers of the National Congress declared two new Protected Areas in the Argentine Sea. This way, Argentina triples its marine protected area and thus concretize the greatest advance in history towards the conservation of its sea.

(12.12.2018) – On Wednesday afternoon, the Chamber of Senators of Argentina voted in favor of the creation of the Marine Protected Areas “Yaganes” and “Namuncurá / Burdwood Bank II,” completing the partial approval granted by the Chamber of Deputies last Thursday. The approval of this law strengthens the state policy towards the sea.

These new areas “represent an achievement of the democratic process, as well as a significant benefit for conservation. Sea and sky parks, where a great amount of penguins and albatrosses, sea lions and elephants, sharks, rays, cold corals and many other species, will be able to fulfill their life cycles in peace and by the laws of nature. The Argentine member organizations of the Forum for the Conservation of the Patagonian Sea thank the provincial and national authorities for their work for the common good,” reflected Dr. Claudio Campagna, President of the network that brings together civil society organizations for the regional marine conservation. 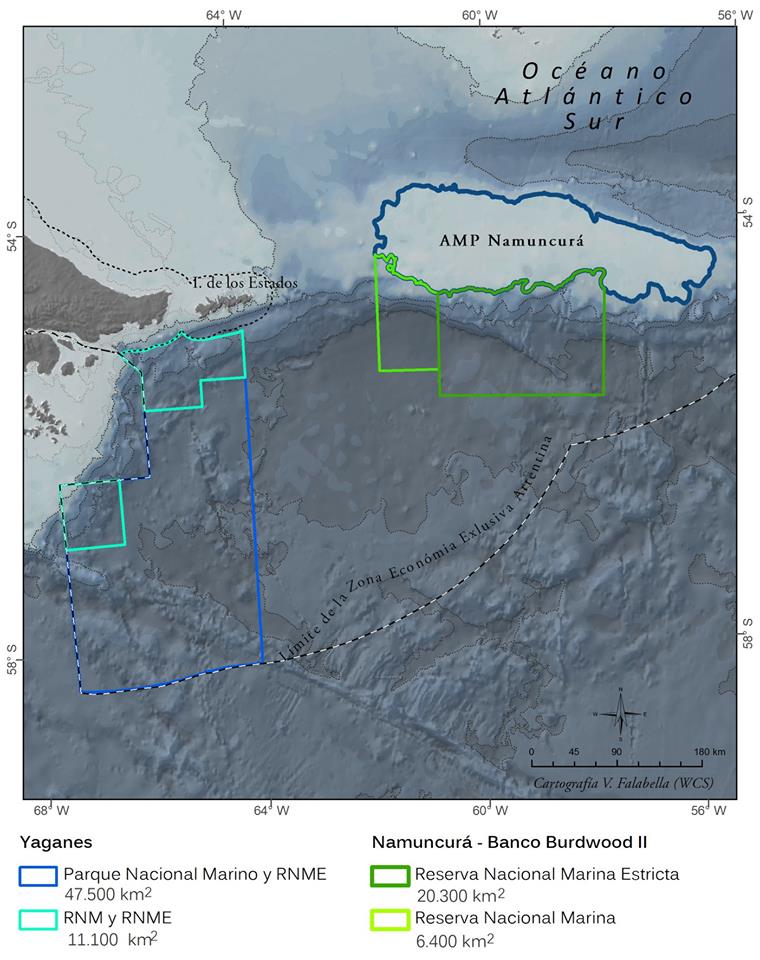 Most of the Argentine Marine Protected Areas are coastal and small, with the exception of the first, and so far the only, ocean protected area in the country, “Namuncurá/Banco Burdwood”, created in 2013. “Yaganes” and “Namuncurá/Burdwood Bank II” will incorporate more than 90 thousand square kilometers of purely oceanic habitat, which means a significant progress that will triple the protected surface of the Argentine sea. And above all, they will strengthen the National System of Marine Protected Areas, which seeks to create a coherent network of planned and managed areas, under the responsibility of the National Parks Administration.

The Forum for the Conservation of the Patagonian Sea indicated that “we will continue to work so that the system incorporates other sites of high conservation value, focusing on threatened species or in the presence of highly diverse productive fronts. There are key areas in the center and north of our sea, and at the edge of the shelf break, where human activities are intense, so they require urgent attention. Although we are encouraged by the increase in the number and the surface of marine protected areas, it is necessary to achieve representation to create a true system that encompasses the diversity of species and habitats, and connects the ecosystems that we seek to protect.”

Milestones for the Conservation of the Argentine Sea

Protecting the sea; for everything, for everyone

Since November 2017, the newly created marine parks had to go through Congress. According to the available scientific information and the opinions of experts gathered in reports and publications of the CONICET and the Forum for the Conservation of the Patagonian Sea, these are oceanic environments that meet outstanding ecological and oceanographic conditions.

In addition to promoting research, biodiversity conservation and the protection of the role and structure of southern marine ecosystems, the new areas will help keep healthy environments that will also benefit extractive activities, such as fishing. The protection of habitats and species will favor the development of economic activities relevant to the Argentine Patagonian coast, such as wildlife-based tourism.

The Yagan people, native to Tierra del Fuego, is currently represented by a few descendants that remind us of the human dependence on the marine environment. That people, more than any other, would understand the importance of the creation of this marine park. The richness of species and resources in the Argentine continental shelf is associated with the Malvinas Current, with water that flows towards the north passing near the sea of the Yaganes. The protection of these waters will benefit many species in the Argentine Sea, not only those that feed in this region and can be observed on the surface, such as penguins and sea lions, but also others that live in the dark and cold bottom of the sea, such as sponges and cold coral.

As part of the process towards its designation, in February 2018 an unprecedented expedition was carried out in this region by National Geographic through its “Pristine Seas” project, with the support of the Ministry of Environment, the National Parks Administration, the government of Tierra del Fuego and the Forum for the Conservation of the Patagonian Sea, which verified through scientific studies and cutting-edge technology the high ecological value of Yaganes and the need to protect it.

Excerpt from the documentary “Yaganes,” by National Geographic Pristine Seas

It will double the surface of the marine protected area “Namuncurá / Burdwood Bank” to the south and will allow the incorporation of a large sector of the slope that surrounds the Bank, where the greatest abundance of vulnerable, ecosystem-forming species has been identified. It is a unique area because of the richness of its seabed. Numerous species of invertebrates live there, such as sponges and cold water corals that form colorful “gardens” or underwater “forests”. This area is also relevant for the life cycle of commercial fish species, such as Patagonian toothfish, hake and Polaca, among others.