Nearly 600 people lit their voices for a #BeagleChannelFreeFromSalmonFarming. The premiere in Ushuaia of the documentary “Yaganes”, produced by National Geographic through its marine conservation initiative Pristine Seas, was the perfect excuse to remind the value of a unique ecosystem through spectacular images, as a prelude to its protection against the threat of salmon farming on both banks of the Beagle Channel.

Currently, the Beagle Channel is under threat from the possible installation of salmon farming centers, both on the Chilean and Argentinean side. Faced with this, local and regional organizations organized an event to highlight the ecosystem and warn of the serious and irreversible damage that the industry would cause in the area.

More than 600 people responded to the call to discover “Yaganes” -the NatGeo documentary-, and to protect the Beagle Channel from the salmon farms, in a moving event held on May 9, in Ushuaia, that culminated with an empowered and strengthened community, under the slogan “No to the salmon farmers”. The call was made by the movement No to the Salmoneras in the Beagle Channel, the National Geographic Pristine Seas Program, and the Beagle Secrets of the Sea, Greenpeace, Association of Tourism Professionals, Mane’Kenk, Ushuaia XXI Foundation and the Forum for the Conservation of the Patagonian Sea.

Celebrate and protect the Beagle Channel

NatGeo’s documentary is the result of an unprecedented expedition that investigated and filmed the shallow coastal zone with open-ocean technology and deep-sea habitats in the northern part of the Yaganes Basin (protected by a National Marine Park since the end of 2018), Península Mitre and Isla de los Estados. The results allow us to conclude that in the region there are spectacular environments, both coastal and deep and pelagic (open waters), in which there are charismatic species and others of high commercial value.

“We can not afford to lose places like the Beagle Channel, we need to protect it from activities that put at risk its biodiversity and human life, and that is why this call is so important to give a message to Argentina, Chile and everyone that we are not willing to accept that this great jewel of the planet is lost, “said Alex Muñoz, director for Latin America of NatGeo Pristine Seas.

In addition, the organization Beagle Secretos del Mar, screened its new documentary, “Canal Onashaga“, prepared especially for the occasion. In it, scientists, biologists, economists and environmentalists -both from Argentina and Chile-, together with spectacular images of the Canal, expressed the values, risks and opportunities presented by a unique area for the seas and the planet.

On the other hand, Gustavo Lovrich, researcher of CONICET, represented the collective No to the Salmoneras, and highlighted the message of the movement, and the need to raise awareness in the local community about the dangers that the salmon industry could have on the Canal. Adrian Schiavini, from CADIC, presented how salmon farming could affect sea lion communities in the region, one of the impacts that have already been documented on the Chilean side.

From the Association of Tourism Professionals of Tierra del Fuego, highlighted that the Beagle Channel is one of the main attractions of the sector, and that generates one of the main economic activities of the province, generating 16 thousand direct and indirect jobs. In this way, the risk that salmon farming would have at an economic and social level was emphasized, based on the impact and degradation on coastal scenarios that, in 2017, for example, attracted 380 thousand visitors to the city, and of which 80 % opted to tour the Beagle as part of the proposed excursions. 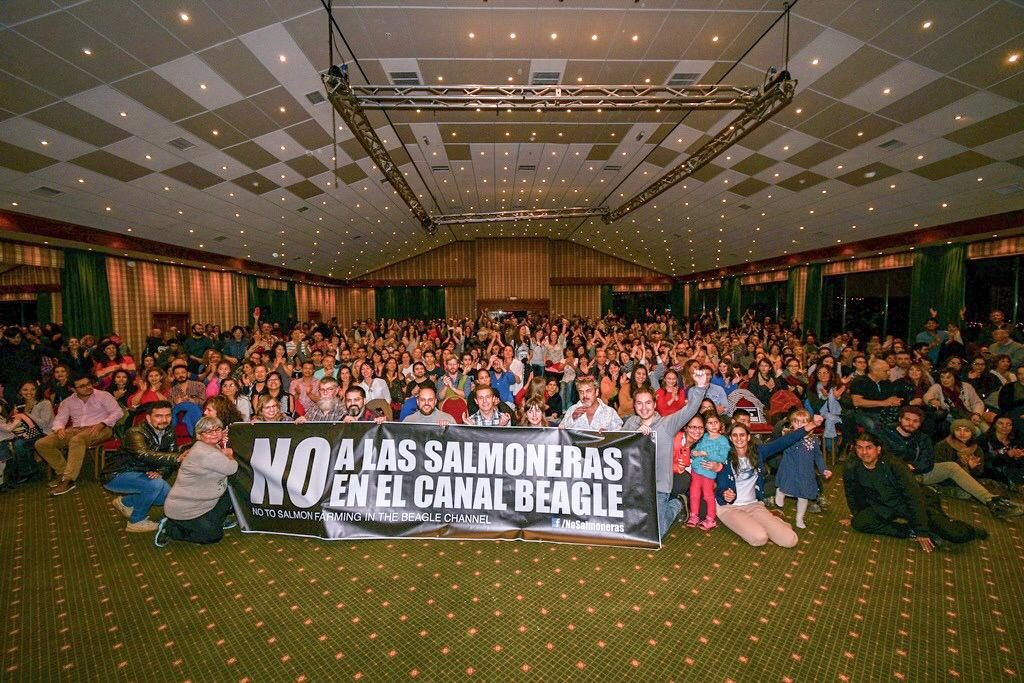 Connected by the sea

“We are saying No To Salmon Farming, accompanying our Yaganes brothers on the other side of the Beagle Channel, because we are a single original town for whom there never were borders”, shared María Vargas, member of the Yagan people who also participated in the event.

“The sea connects us” emphasized Alexandra Sapoznikow, coordinator of the Forum for the Conservation of the Patagonian Sea. “There are processes that occur throughout the region and there are species that take advantage of this sea as a one, beyond political borders and we believe that together we can synergize and articulate our actions to be more effective and that countries make decisions to have oceans healthy”.

In the context of current plans to expand the salmon industry in the Beagle Channel, the Forum expressed its categorical rejection to the installation of salmon farms in these waters shared by Chile and Argentina. The main concern is related to the catastrophic and irreversible damages that such an industry would cause in one of the most valuable areas of the Patagonian marine ecosystem. The Forum calls on both governments to develop all the necessary legal and administrative measures to avoid installing salmon farms in these marine waters and to act jointly in the conservation of this area.

Marine Protected Areas: A view on the future of the Patagonian Sea’s biodiversity
Effectiveness of Marine Protected Areas on the conservation and management of biodiversity
Login to The Forum for the Conservation of the Patagonian Sea
Reset Password
Enter the username or e-mail you used in your profile. A password reset link will be sent to you by email.