How to change our behavior to reduce ocean plastic pollution

Members of the Forum for the Conservation of the Patagonian Sea presented 5 campaign projects to promote socially favorable behaviors regarding marine pollution, especially, to reduce plastic waste in the sea. It was the result of the Workshop “Social Marketing based on the Communities”, facilitated by Dr. Marcela Uhart, with support from One Health Institute, Wildlife Health Center, UC Davis and the Houston Zoo.

The presence of plastics in the sea is gaining unprecedented notoriety. That is not strange considering that estimates indicate that between 8 and 13 million tons of waste reach the sea and the coasts every year, and more than 80% of that waste are plastics. Once the plastics are there, marine and coastal ecosystems are disrupted, marine species are affected by the ingestion of plastic or by their interaction with it, landscapes are degraded damaging tourism, and human health is affected. Most of these impacts are evident.

However, the causes of pollution and its prevention, although everyday, may not be so obvious: What do we need, in addition to information, to change our behavior? What behaviors do we need to change more urgently in each region of the planet? How can we modify small habits to achieve great impacts? How can we make sure that the measures we take today, generate benefits forever?

In 2018 the organizations part of the Forum for the Conservation of the Patagonian Sea began to test responses in the framework of the proposal of the Community-Based Social Marketing (CBSM) Workshop, provided by Dr. Marcela Uhart, with support from the University of California, Davis, and the Houston Zoo. Through its pragmatic approach, the CBSM carefully selects the behaviors to be transformed or promoted, identifies the associated barriers and benefits, designs a strategy to address them, implements pilot tests, and finally, evaluates the impact of the program once it has been widely implemented.

As a result of the workshop, the organizations presented 5 campaign projects to promote socially favorable behaviors regarding marine pollution and, especially, the reduction of plastic waste at sea. The workshop organizers, in addition to providing theoretical support and follow-up, provided economic incentives for the implementation of the pilot tests of each campaign.

The consumption of single-use plastics such as drinking straws and plastic cups is frequent in restaurants at Puerto Madryn, Chubut (Argentina), sometimes due to the lack of information, and sometimes due to the lack of choice. The excessive supply of these items generates tons of waste that can end up along the coast of one of the most valuable sites for Patagonian marine biodiversity and for the enjoyment of thousands of tourists. This affects both the beach and the sea.

The organization Global Penguin Society discovered that 72% of people would like beach clubs to stop giving out disposable items. This way, they proposed that beach clubs that adhere to the campaign “I reuse my cup, skip the straw” reuse cups from the company Qero EcoVasos (https://www.ecovasos.com) and provide customers with biodegradable paper drinking straws.

In the next season the strategy will be implemented in 4 new restaurants. The campaign involved training of personnel, educational awareness activities and surveys to the target public where environmental promoters provided information on environmental issues. 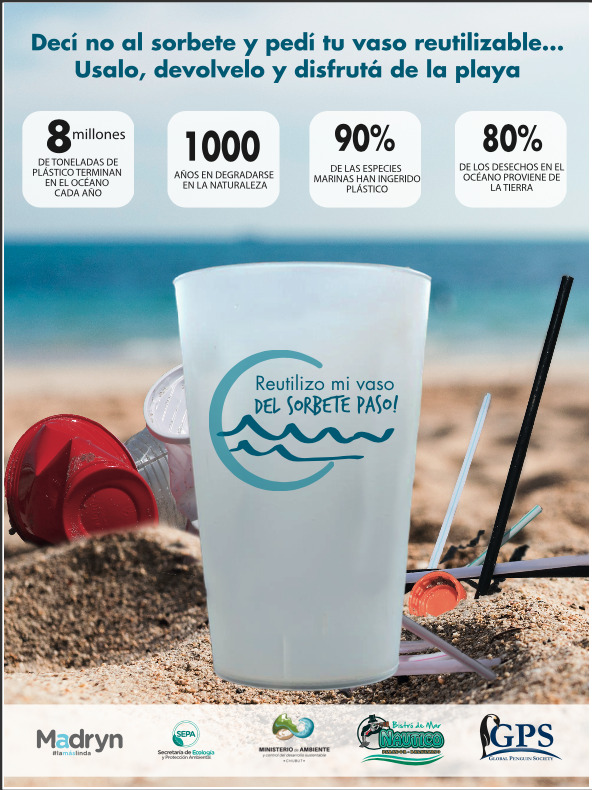 THE FISHING THAT WE DON’T SEE / ARGENTINIAN BIRDS

In Argentina, Olrog’s gull is considered a vulnerable species. One of its main threats is sport fishing as gulls tend to go near the sites where the activity is carried out to feed on bait and fish leftovers. This behavior can cause the entanglement of birds with monofilament or abandoned fishing lines, with the subsequent damage or even death of the bird. Cutting and discarding fishing lines was recognized as the behavior with the highest incidence among those associated with the threat to the species. Based on the results of a hundred surveys conducted by Aves Argentinas, one of the specific obstacles identified is the lack of awareness regarding the impact that fishing lines can have on Olrog’s gulls. But it was also identified that there is a willingness to change the aforementioned practice but the sites do not have the adequate infrastructure (baskets) for the correct disposal of the waste that causes the threat.

In light of this situation, waste bins for fishing lines are going to be place every 50 meters, as well as an “interpretive path” with information about the conservation status of local species, and fishermen will receive certain incentives in order to encourage their favorable behavior towards this species. 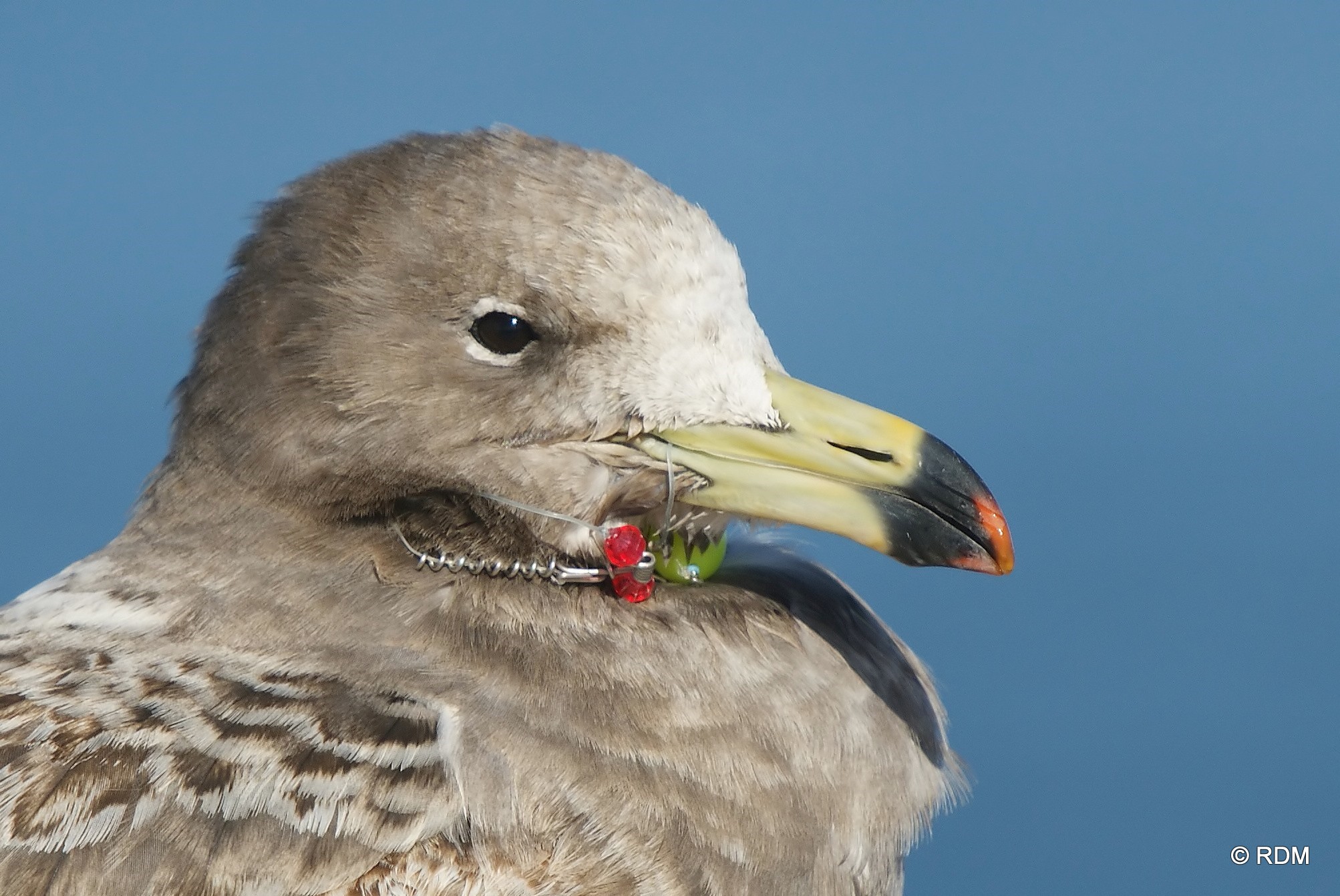 The Multiple Use Coastal Marine Protected Area “Seno Almirantazgo” (Magallanes Region and Antártica Chilena) is an area of high productivity and with a great richness of rare and endemic species of global importance, such as marine mammals and birds. But the contamination of its coasts with plastic garbage, mainly waste generated by diverse productive activities such as special interest tourism and artisanal fishing, could affect the marine life of the place.

In the case of fishermen, WCS Chile registered that more than 80% of respondents dispose of their waste in marine ecosystems and / or carry out actions that could threaten the safety of fishing activity. Only 20% of respondents claim to return their waste to the fishing terminal. In this context, the same respondents identify the current waste management “as a problem for the activity”. WCS also identified almost zero waste management in the region and lack of information on the impacts that plastic generates on marine ecosystems. Therefore, they proposed theoretical/practical workshops in order to reflect together with fishermen and to train them on the processing and transformation of plastics generated by artisanal fishieries into useful devices such as containers or buoys. It could also increase the value to the fish product, by selling products free of plastic contaminants. 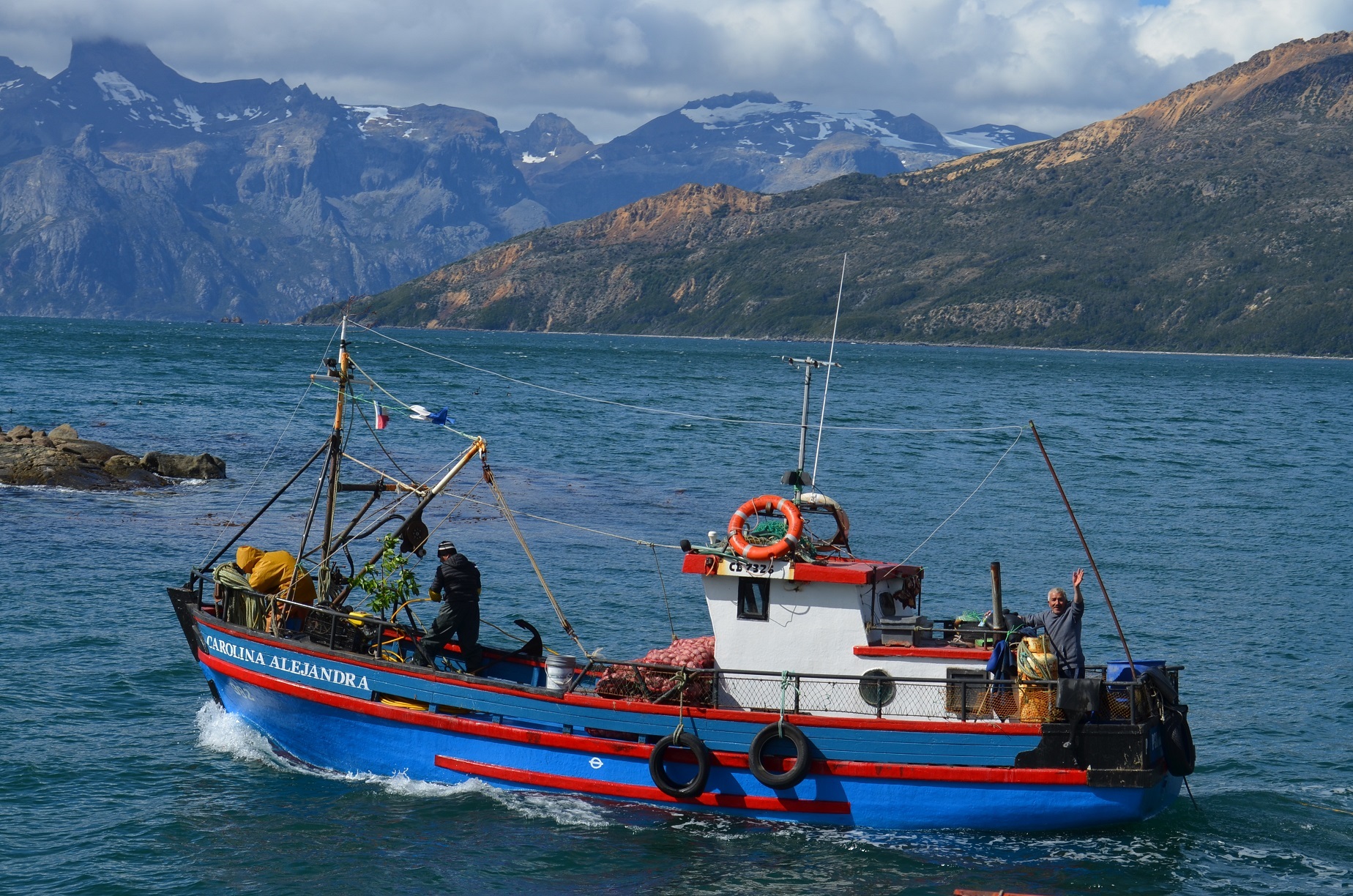 Thousands of tourists visit the Temaikèn Biopark (Escobar, Argentina), near the Paraná Delta, which, same as most water bodies, also suffers contamination by single-use plastics. During the summer, “Goodbye Drinking Straw” campaign began, focused on the elimination of plastic straws in all the restaurants and paradors of the Biopark. A communications campaign provides information to visitors promoting sustainable habits, before, during and after their visit.

When people purchase their ticket online, they receive an email with “Ecotips” raising awareness regarding their role in preventing the pollution caused by this kind of plastics. Once at the biopark, they can read posters with information explaining why all the restaurants and “paradores” there stopped using drinking straws. After their visit, families are encouraged to commit to stop using single-use plastics, beginning with straws, and to show their commitment in social networks using the hashtag #ChauSorbetes. 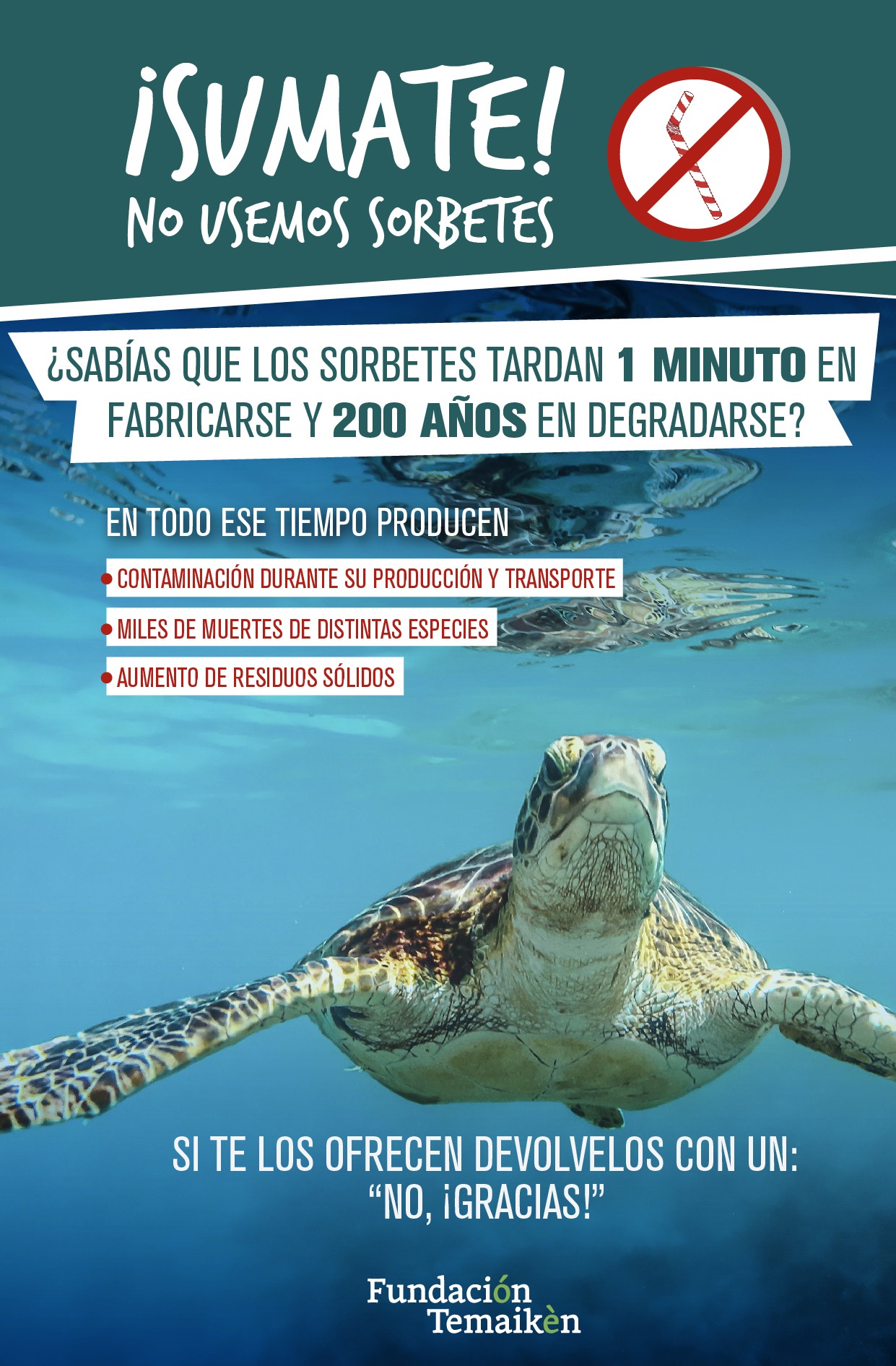 “YOUR TRASH IN ITS PLACE” / FUNDACIÓN VIDA SILVESTRE ARGENTINA

Mar del Plata is the coastal tourist city most visited in Argentina and, consequently, its beaches are among the most polluted ones, especially because of the consumption and disposal of single-use plastics and the lack of responsibility over the generated waste.

Fundación Vida Silvestre Argentina, which annually performs the Coastal Waste Censuses in order to record the situation on the beaches, identify what type and amount of waste affect the coasts and find solutions, conducted a series of cleanups with volunteers in Mar del Plata during the summer season with the purpose of raising awareness among holidaymakers about the problem of garbage at sea, reducing the consumption of single-use plastics and applying a correct disposition of the waste that is generated. The recovered waste was destined to the cooperative of Pinamar «Recycling Conscience», who operate the recyclable waste plant of that locality. 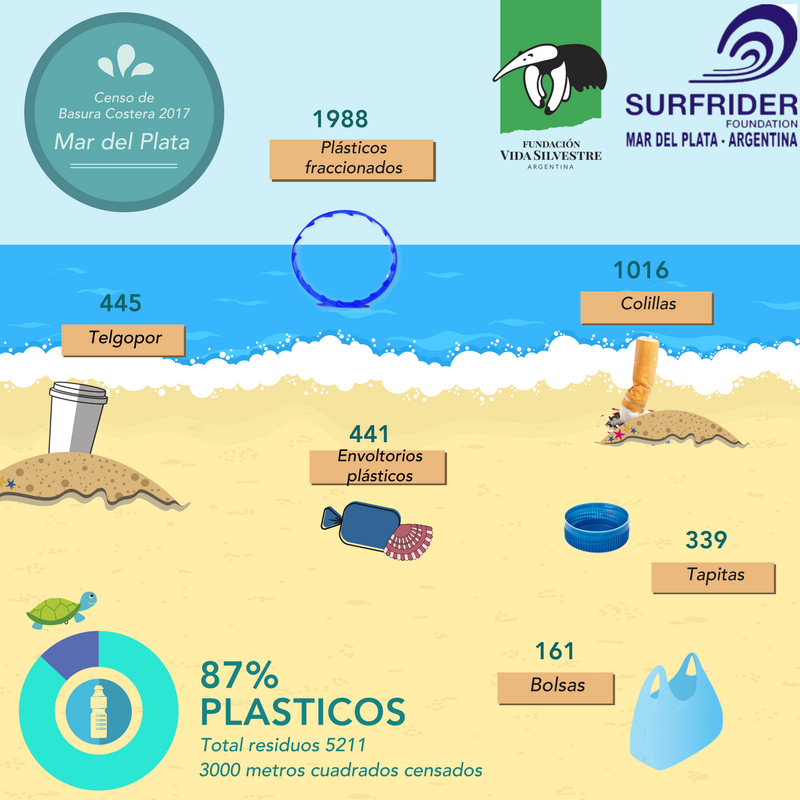