A call that seeks to unite all the nations of the world around the moto “Bringing People and the Oceans together”, ends the 4th International Marine Protected Areas Congress (IMPAC 4). The Forum for the Conservation of the Patagonian Sea and Areas of Influence added its voice through 5 proposals presented during the world’s largest ocean conservation meeting. 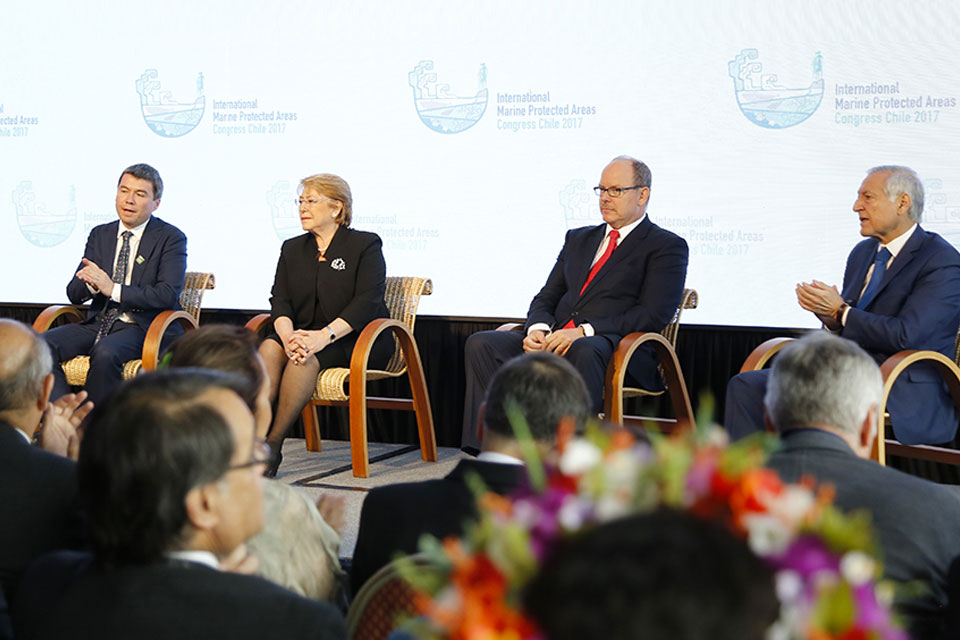 From September 4 to 8 2017, more than 700 managers and specialists on Marine Protected Areas (MPA) met in Chile to promote a valuable exchange of ideas and learning about these tools for the conservation of marine ecosystems. Several members of the Forum for the Conservation of the Patagonian Sea, thanks to the support of Oceans 5, were present, and highlighted salient points of the meeting.

One of them was that even the more experienced countries in the creation and management of MPAs, such as Australia, share many of the challenges that arise in other seas of the world for effective implementation. Although the scenarios are complex and involve many variables, some of them are associated with the availability of resources, the cooperation between actors involved and the training of managers and technicians for the planning, management and monitoring of MPAs.

In this way, Andrea Michelson, Coordinator of the Forum’s project “An Integrated Effort for the Conservation of the Wildlife and Wild Places of the Patagonian Sea”, financed by Oceans 5, held an oral session called ” Launching the Marine Protected Areas School: an integrated regional training initiative for managers of southern South America”. The school was inaugurated in August 2017 and represents the first course for Marine Protected Areas managers of the Southern Cone (Argentina, Chile and Uruguay). A Knowledge Café was also held by the Forum on “Integrating the training of MPA managers at the international level”.

Another point to note was the increasing number and surface of MPAs being created across the world’s oceans in order to reach the goal of 10% of protected marine area, by several countries before 2020. However, it was pointed out the importance of creating a true MPA system, representing the diversity and connection of the ecosystems that are sought to protect. In many cases, cooperation between people, organizations, scientists and authorities in a number of countries and territories is necessary to make these systems effectives.

This Forum work approach was represented through the Symposium “Argentina and Chile: Common Approaches for Marine Conservation in Antarctica and Patagonia,” during which Claudio Campagna, Chair of the Forum, addressed the issue with Ambassador Matías Undurraga, Director of Maritime Interests of the Ministry of Foreign Affairs of Chile, and Mercedes Santos, Director of the Program for Ecosystem Monitoring of the Argentine Antarctic Institute. The sea of Drake and Cape Horn, in the austral sea of Chile and Argentina, the Antarctic Peninsula, were presented as examples where public and private efforts are being made to create MPAs that protect the biodiversity that neighboring Chile and Argentina share.

Another remarcable aspect was the encouraging representation of actors involved in marine conservation, both of public sector and civil society. And associated to this, the relevance that acquires the cooperation between them to achieve synergies and optimize resources in order to reach the ambitious goals to be met in terms of AMP worldwide.

The Forum contribution on this theme took place during the Symposium ” Civil society networking for marine conservation in the Southern Cone: lessons from collaborative working “. Alexandra Sapoznikow, Forum Coordinator, along with Alejandra Figueroa, Head of the Natural Resources and Biodiversity Division of the Ministry of Environment of Chile, Joaquín Labougle, of the General Directorate of Legal Affairs of the National Parks Administration of Argentina, Emiliano Ezcurra, Vice President of the National Parks Administration of Argentina, María José González, Executive Director of the Mesoamerican Reef Fund (MarFund) and Pamela Castillo, Program Manager of the Costa Rica Association for Alwaysm, were responsible for illustrating learning and challenges about the issue.

Finally, a common denominator for several of the meetings of IMPAC4, which will surely generate new projects and future debates, was the role of communities in the creation and management of MPAs. “It is very important that we bring people and oceans together, that is to say , that we know how to involve the public, with education, knowledge, access to the oceans,” said the President of the Republic of Chile, Michelle Bachelet, during the meeting that preceded the Call to Action for the Oceans. The message was accompanied by the communication of the creation of the Marine Areas Network of Magallanes, in Chile, an encouraging and challenger announcement for the end of the Congress.

The Forum at the International Congress of Marine Protected Areas

Managers of marine protected areas meet to delve into conservation

Workshop on Marine Protected Areas of Argentina in Rawson, Chubut, brings together key stakeholders
Progress towards the protection of Isla Guafo
Login to The Forum for the Conservation of the Patagonian Sea
Reset Password
Enter the username or e-mail you used in your profile. A password reset link will be sent to you by email.