The Forum held its XII Plenary Meeting in Chile

On October 25 and 26, 2014 the Forum held its Plenary Meeting number 12 celebrating its 10th anniversary in Puerto Varas, Chile. The objective of the meeting was increasing collaboration among civil society organizations (NGOs) working for the conservation of the Southern Cone seas, in order to effectively promote coordination of actions and policies among countries in the region.

The meeting was attended by 34 participants representing 22 organizations. Regarding their origin, 16 participants were from Chile, 12 from Argentina, one from Uruguay and the others belong to international organizations with head offices in the Northern Hemisphere. People attending the meeting have scientific background and remarkable experience in conservation-related issues such as ecology, law and public policy. Activities of the Forum have been supported this year by Oak Foundation, Oceana, WCS, Fundación Vida Silvestre Argentina, Fundación Pumalín, UNDP-GEF Project on the National System of Protected Areas for Chile and Fundación Telefónica. 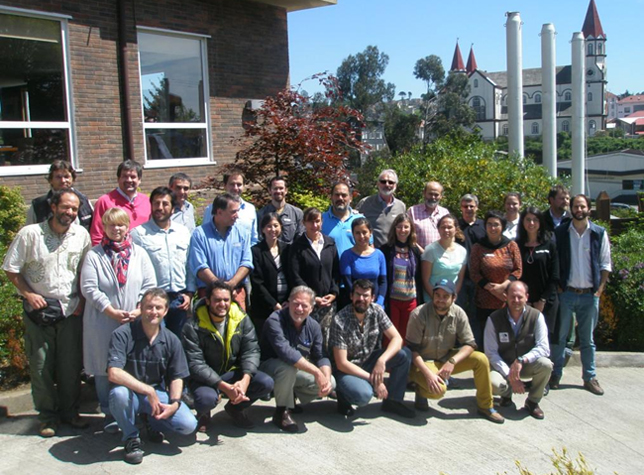 Attendees of the meeting undertook a participative update of main threats to biodiversity and conservation needs in relevant sites of the Patagonian Sea. Experts agreed that marine pollution (actual or potential) is the most widespread problem in the region. Pollution sources are cities and ports in many places of the coast, hydrocarbons (in the South Atlantic Islands, in coasts of Argentine Patagonia and in the Magellan strait) and salmon farming in Chilean Patagonia.

Other threats present in several sectors are overfishing and by-catch of non-commercial species by fishing gear. The lack of regional coordination among neighboring countries and territories regarding policies for the management of marine resources was pointed out as a factor that aggravates the some of the threats detected.

Appraisal of the Forum

A critical appraisal of the Forum’s first ten years was performed. There was a general agreement in considering the Forum as a useful initiative because it increases the impacts of conservation projects and programs of member organizations. Participants pointed out its regional scope, thus helping in understanding the scales of problems affecting the ecosystem. Attendees also highlighted that it allows collaboration, builds opportunities for advocacy on public policies, stimulates knowledge and experience sharing, delivers high-quality, science-based products and contributes in motivating and inspiring the staff of every member organization. They mentioned as promising some advocacy achievements, especially in Argentina, in regards of new laws and policies. Finally, they identified some pending issues for the future, and among them:

Renewal of the Steering Group

Objectives for a Forum strategy

During the meeting, participants reached agreements on guidelines for the new Forum objectives. Several participants remarked the need of enhancing the operation of the network in order to achieve synergy among members. They pointed out the need to provide more opportunities for dialogue and mutual exchange among organizations in order to identify issues for collaboration. Other important objectives of the Forum should be: advocating towards coordination of conservation policies among Chile, Argentina and Uruguay; promoting a comprehensive assessment of the status of conservation of marine species in the region; enhancing communication of marine conservation messages to the public.

Participants showed their hope about the opportunities and potential achievements that they could reach by means of the Forum regarding conservation of the regional marine ecosystem. They highlighted gradual progress made by the Forum and the fact that it allows greater conservation impacts than those that could be achieved by each organization by its own. Finally, attendees pointed out the need to maintain the human values that make true collaboration possible.

After the Plenary Meeting in Puerto Varas there was a public presentation about the Forum in Santiago, the capital of Chile, within the framework of a series of seminars on protected areas organized by the UNDP – GEF Project on the National System of Protected Areas for Chile. The venue was the Fundación Telefónica hall. Claudio Campagna, founder of the Forum and René Araneda, Chilean TV presenter and wildlife film producer, spoke for some 50 people. Campagna stated that the Patagonian Sea is a large marine ecosystem, shared by the countries of the Southern Cone, thus requiring regional cooperation for its management. During the seminar, the book on the “Lighthouses of the Patagonian Sea” published by the Forum in 2013 was launched in Chile.

The Patagonian Sea with its areas of influence stretches from southern Brazil to Tierra del Fuego in the Atlantic, whereas in the Pacific it stretches up to the channels and fjords in southern Chile. This enormous ecosystem of at least 3,000,000 km2, comprises coastal environments, islands, submarine plains, submerged slopes and deep abysses from the surface to the seabed. The Patagonian Sea includes extensive and highly-productive oceanic fronts. It also comprises important fisheries as well as foraging and migration areas for turtles, seabirds and marine mammals. From the political angle it includes provincial jurisdictions, territorial seas, exclusive economic zones of various countries and international waters or high seas. Oceanographic and ecological processes occur in very large areas exceeding national jurisdictions and explain the need of the regional scope promoted by the Forum.

XII Meeting of the Forum in Chile